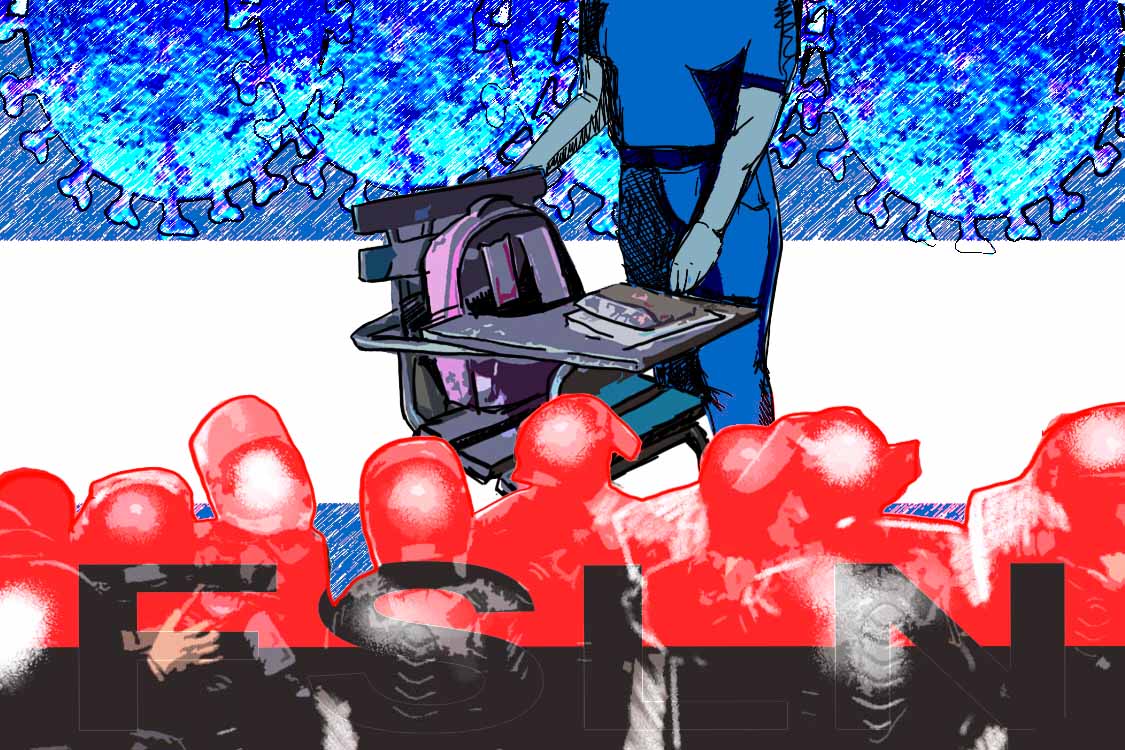 Back to school amid pandemic, repression and political pressure

It has been three weeks since Nicaragua’s public schools opened their doors to 1.8 million students. The government has done nothing except to promote biosecurity measures in schools, even though not all schools have adequate infrastructure and the necessary resources, such as soap and water. They have not conducted the school opening with the responsibility and seriousness that they should, experts consulted on the issue said.

Overcrowded classrooms, neglected infrastructure, no drinking water, weak safety protocols, and no mask requirements for students and teachers. “Blessed school year 2021” the government of Daniel Ortega and Rosario Murillo has dubbed it.

The budget allocated to the Ministry of Education (”Mined“ in Spanish) for this year is 14,613.43 million cordobas (US$ 420.7 million), which does not include financial support for public schools to comply with measures to combat COVID-19. Only 7% of those funds are allocated to infrastructure, 700 million less than last year, said Marvin García, a member of the Coordinadora de la Niñez (Committee for Childhood – Codeni in Spanish).

The Mined reports 9,105 schools nationwide, as reflected in the 2021 General Budget for Nicaragua.

“One of the biggest problems is that approximately 35% (3,185) of the schools in the country have trouble with access to water, problems with the health infrastructure, and despite the fact that the Ministry has directed the schools to guarantee COVID-19 prevention measures, it is very difficult to meet the proposed guidelines,” said García.

“They talk about these measures, but in the end it’s us, the teachers, who have to buy everything, from the soap on. They (the authorities) do not guarantee anything for the health measures in the schools,” said a teacher from the city of Jinotega, located a little more than 140 kilometers from the capital, when Expediente Público asked him about the Ministry guidelines for returning to school in the pandemic.

Read also: Back to school for 1.8 million Nicaraguan students in pandemic times

Classrooms of more than 35 students

The start of the school year filled the classrooms above capacity, as has been the case over the last decade. However, in a pandemic, this becomes even more significant.

García, of Codeni, warned that the school environment situation has been very critical for many years, because “the number of students per classroom exceeds forty, when the Mined standard and even the Education Act (Bill 582, Article 23) mandates 35.”

One of the basic measures recommended by the World Health Organization (WHO) to avoid the spread of COVID-19 is social distancing. In the opinion of García, who is a specialist, it will be very difficult to comply unless the Ministry decides to divide up classes into smaller groups of students, as private schools are doing.

“We have filed a complaint that in many of the schools they did not implement all the health measures that are needed for protection. The vast majority of public schools are over-enrolled, with 45 to 70 students per classroom. This does not allow safe distancing at all times to avoid the spread of the pandemic,” Lesbia Rodríguez, president of the Nicaraguan Trade Union Unit (USMN), told Expediente Público.

She also noted that the education community, both teachers and parents, has been affected financially by having to buy, in addition to books, uniforms and class materials, also masks, alcohol and even water because there are schools that do not have these.

“In my classroom there are 42 of us and we sit with the desks close together. We do not keep our distance, and the teachers have to bring water for hand washing, because we don’t have clean water in our school,” said Marvin Moreno, a fourth-year secondary student in the city of Rivas, 112 kilometers towards the south.

A teacher from Managua who asked not to be named for fear of reprisals, stated that “with a class size of 60 students in each section, it takes an hour or two for all of them to wash their hands if we really want them to wash well. This is another of the realities that we live with and that perhaps the government is unaware of or turns a blind eye to,“ he said.

The safety protocol is to send them home

If a student has flu-like symptoms, a cough, or fever detected by the teacher (with a hand to the forehead in the absence of a thermometer), the protocol states that the student should be sent home.

As of February 17, Nicaragua had 12,955 verified suspected cases and 2,970 deaths from pneumonia or suspected COVID-19, according to statistics from the COVID-19 Citizen Observatory.

The Ministry of Health (Minsa) recognizes a cumulative toll of 6,341 positive cases and 172 deaths from the virus in the country over the same period.

Rodríguez said that there is no interest in complying with the measures to safeguard students’ and teachers’ lives, because otherwise the government would not promote people gathering at fairs, stadiums and processions. This is exemplified by the case of teacher Oscar Perlas Rojas, who died on February 9 at the Josefa Toledo de Aguerri school in Managua with symptoms of the virus.

“We have already seen that a teacher in a District I school died. They brought him in and we do’t know if they took him to the hospital or the cemetery. What we do know is that the teacher had symptoms, but there was no test. Neither the Ministry of Health or Education was going to corroborate what the teachers say, that that colleague died of COVID,” said the president of the Teachers Unit.

As of December 2020, of suspected coronavirus deaths, 52 have been teachers, according to USMN statistics, and the risk of spread continues due to lack of a safety protocol.

You may want to read: Nicaraguan regime keeps public schools defenseless against the threat of COVID-19

Propaganda and teachers under threat

The pandemic is one more crisis that the country is undergoing in addition to political instability and government repression, which have caused a deep recession in the economy and have been aggravating violence since 2018.

Over the past three years, the regime has tried to sweep under the rug the acts of impunity committed against its opponents in complicity with the National Police, an institution sanctioned since March 5, 2020, and which is now promoted by the government as an example to follow on the cover of notebooks provided to students.

“In Chontales, (a department located in the southwest of the country), unfortunately, the beginning of the school year was plagued with propaganda for the ruling party, especially in the public schools. There were schools that propagandized the gifts of backpacks and notebooks promoting the police, who had been sanctioned,“ commented a teacher from the Teacher’s Union Unit.

Another teacher, from the same Unit, said that they are even used in advertising because they have to appear in photos when they hand out the notebooks and backpacks with Sandinista propaganda. ”It is compulsory free political propaganda; students and teachers have to carry messages from the party on our backs,” said the teacher.

A teacher from Chontales said they have received warnings from the Mined authorities. “The teachers have to keep their mouths shut, they have been cruelly threatened by representatives, by principals of being fired if they don’t toe the line or if they don’t share the publications in favor of Daniel’s party campaign on social networks,” he said.

On February 11, on its official Facebook page, the USMN denounced the threats directed at teachers by the Mined Director of Culture, Harold Delgado.

“It’s not about muzzling anyone, what it is about is calling you to be ethical, to be sensible. Brother, if you work for the Ministry of Education, which oversees and works to create educational quality and you start waging an advertising war, you say that you are in a dictatorship. If this is a dictatorship to you, what are you doing here? And I say, with all respect, if this is a dictatorship for you, what are you doing here? Go to paradise then,” Delgado threatened in the video.

“When a Mined representative arrives, the song goes, ‘For our government, our government cares about everyone, about education…’,” added a teacher from Bluefields, on the Caribbean coast of Nicaragua.

COVID-19 cases on the rise, school year at risk

Some students said they were given talks in the final hours of the school day, encouraging them to join and elect representatives of the Federation of Secondary Students (FES), the political arm of the Sandinista National Liberation Front (FSLN) in the public schools.

“They tell us that it’s the government who is giving all the money for improving the school and repairing the desks,” said a secondary school student.

According to García of the Codeni, the authorities have tried to normalize the pandemic, but that does not mean that they will not neglect biosecurity measures, which could increase COVID-19 spread in schools like in the past year, when parents stopped sending their children to school as a precaution.

“They might have good intentions, but to materialize them in terms of public policy, resources must be allocated. As long as that is not done, it will only be talk, and the right of every child and adolescent to receive a quality education will not be fulfilled,” he concluded. 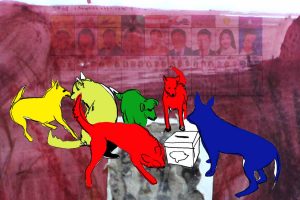 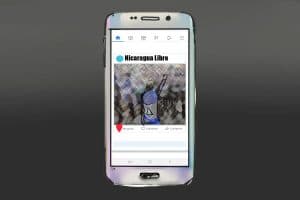 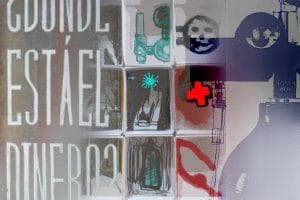